Changing of the Guard Ceremony held at Iqbal MausoleumSEXI News 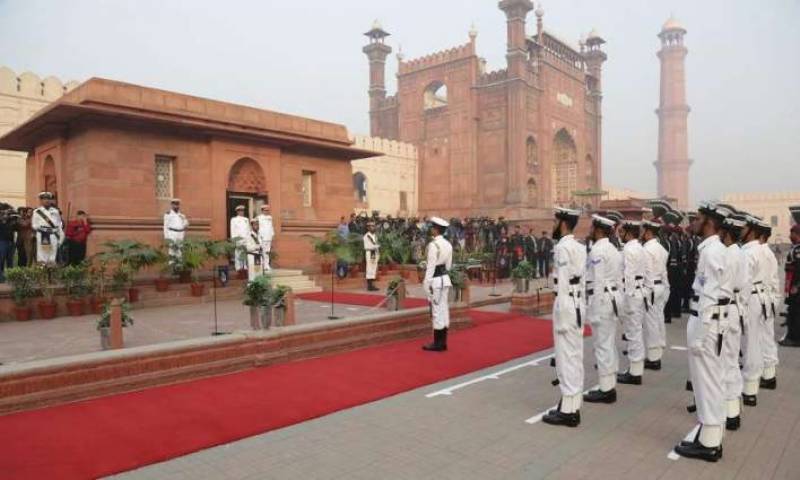 A prestigious changing of the guard ceremony on the occasion of the 141st birth anniversary of the great poet, philosopher and visionary was held here on Friday at the mausoleum of Dr Allama Muhammad Iqbal.

A smartly executed contingent of the Pakistan Navy, dressed in immaculate white, undertook the ceremonial guard duties with traditional spirit and enthusiasm.

On the other hand, on the occasion of Allama Iqbal’s birth anniversary, today (Wednesday) has been declared a national holiday across the country. Federal and provincial institutions remain closed on this day, and all private and public educational institutions in the country, the State Bank and other federal and provincial departments have been declared a holiday today.

The 145th birth anniversary of National Poet Dr Allama Muhammad Iqbal is being observed across the country today (Wednesday) with traditional fervor and enthusiasm.

The federal government has declared November 9 as a public holiday, in connection with the birth anniversary of the country’s national poet and philosopher, Allama Muhammad Iqbal.

Allama Muhammad Iqbal was born in Sialkot on November 9, 1877. He is also recognized as a national poet, known as Mufakir-e-Pakistan (Thinker of Pakistan), Shair-e-Mashrik (Poet of the East) and Hakimul Umat (Doctor of the Muslim Ummah) and credited is to encourage pan-Islamic thought among the Muslims of the subcontinent.

Allama Iqbal conceived the idea of ​​a separate homeland for the Muslims of the subcontinent, which led to the creation of Pakistan in 1947.

It was Iqbal’s dream of a free state, but unfortunately, he could not see the independence of Pakistan and died on 21 April 1938.

We have taken the decisions, now the federal government has to decide, Fawad ChaudhariSEXI News

Our nuclear weapons are no match for PutinSEXI News

We have taken the decisions, now the federal government has to decide, Fawad ChaudhariSEXI News

Our nuclear weapons are no match for PutinSEXI News

Meeting with the Minister of Finance, Senator Shak Dar, Ambassador of UzbekistanSEXI News