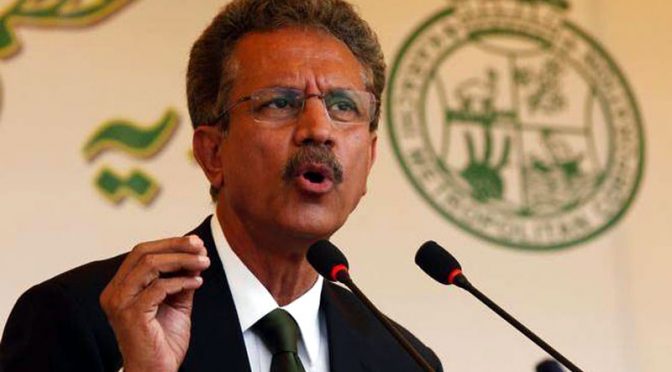 Karachi: (Web Desk) Wasim Akhtar, member of the Coordination Committee of MKM, said that the constituencies should be arranged tonight, the elections should be held tomorrow, we are not running away from the elections, we want correct constituencies.
Addressing a press conference with Khawaja Izharul Hasan, he said that the problems of tax-paying citizens should be resolved.
Former mayor of Karachi Wasim Akhtar said that he reminded the federal government many times but nothing happened, the local government system needs to be strengthened, we went to the Supreme Court on the issue of the local government system, we talked to all parties about the local government system
He said that there are omissions in the voter lists, there are also problems in the constituencies, the MKM vote bank in the constituencies has been reduced, they are fighting this fight not to gain political advantage, but to solve the problems of Karachi.
Wasim Akhtar said mayor should be whoever comes but whoever has powers should be strong, Jamaat-e-Islami and PTI want municipal elections to be held as soon as possible, it seems someone has told these two parties that they will win .
Wasim Akhtar, MKM coordination committee member said that PTI became an ally for the development of Karachi, he had many meetings with former prime minister Imran Khan during 4 years, he informed Imran Khan many times about the problems of Karachi. , MKM made an agreement with PPP to solve the problem of Sindh.
He said that the local self-government representatives do not have the authority and in this regard he addressed the court. The court said that the local self-government system should be strengthened. Our priority is the implementation of the court decision related to the local self-government system.
Wasim Akhtar, addressing the press conference, said that the demands were also made in the meetings with Asif Zardari and Bilawal Bhutto, Asif Zardari and Bilawal said that the demands of MKM are legitimate and should be implemented, not for personal gain, but for solving public problems. I’m trying to

Imran Khan has not made any unconditional offer to negotiate, Fawad ChaudhriSEXI News

Rawalpindi Test, England 657 runs in response to a strong response from the Pakistani playersSEXI News

After the statement of the US President, Russia’s conditional willingness to negotiate with UkraineSEXI News

Imran Khan has not made any unconditional offer to negotiate, Fawad ChaudhriSEXI News

Rawalpindi Test, England 657 runs in response to a strong response from the Pakistani playersSEXI News

After the statement of the US President, Russia’s conditional willingness to negotiate with UkraineSEXI News

Munis Elahi’s meeting with Imran Khan, discussion regarding the dissolution of the assemblySEXI News