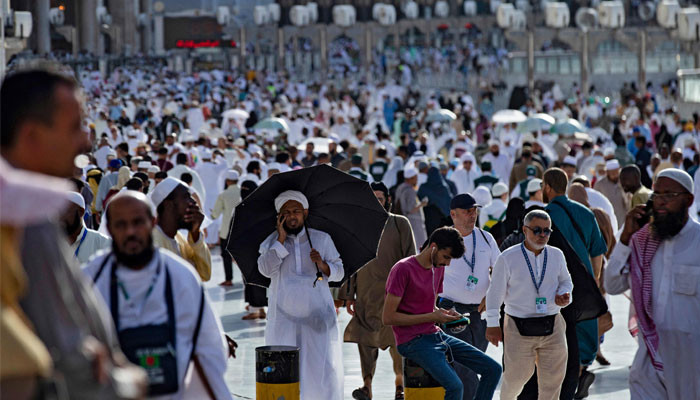 Mecca: Among the thousands of Muslims who arrived in Mecca this week for the annual Hajj pilgrimage, perhaps none had a more difficult journey than Adam Mohammed, 53, an electrical engineer from the United Kingdom.

Mohamed, who is of Iraqi-Kurdish descent, decided to travel to Saudi Arabia last year on foot, a journey of more than 7,000 kilometers (4,350 miles) that took him from Jordan to nine countries before crossing into a northwestern Saudi city. Took through. Tabuk.

The journey was made more dramatic by the fact that when he began his journey 11 months earlier, pushing a cart in front of him containing his food and other supplies, not knowing that he would be able to reach the holy mosques Or not in Mecca and Medina.

It was only in April that Saudi Arabia, which banned foreign pilgrims in 2020 and 2021 as part of efforts to mitigate the coronavirus pandemic, announced that a million Muslims would be able to participate this year, including 850,000 from abroad.

Now safely in Mecca, Mohammed has no regrets, about 15 kilograms (33 lb) lighter than when he started.

“I cried when I first arrived. It’s an incredible feeling,” he told AFP.

“My journey was exhausting. I stopped at several places for rest. But I was focused on one thing: I’m 53, so what if I left 11 months on the road to reach God’s house? Shall I? It’s possible.”

Mohamed said Saudi authorities have allowed him and his wife and two daughters, who have flown from Britain to the Gulf Kingdom, to participate in the Hajj, which includes a series of religious rites performed in Mecca and the surrounding areas of western Saudi Arabia. The series completes. ,

Most of the other foreigners who perform the rituals have been selected through a lottery system.

One of the five pillars of Islam, Hajj should be performed by all able-bodied Muslims who have the means at least once in their lives.

But pandemic restrictions have forced countless pilgrims based outside Saudi Arabia to put their plans on hold.

Usually one of the largest religious gatherings in the world, about 2.5 million people attended in 2019 before the pandemic began.

The following year, foreigners were barred and the total number of worshipers was limited to 10,000 to prevent the Hajj from turning into a global super-spreader.

In 2021 this figure rose to 60,000 fully vaccinated Saudi citizens and residents.

Hosting the Hajj is a matter of prestige and a powerful source of legitimacy for Saudi rulers.

The ban on foreign pilgrims caused deep frustration among Muslims around the world, who usually save up for years to attend.

Although the numbers are much higher this year, there are some restrictions: Participants must be Muslims under 65 years of age who have been fully vaccinated and a negative COVID-19 PCR result from a test done within 72 hours of travel. can present.

Hajj officially begins on Wednesday, and Mecca is already over with worshipers who, like Mohammed, are relieved to finally reach their destination after a long, stressful wait.

A 30-year-old Russian pilgrim, who gave her name as Halima, said she had envisioned living in Mecca for more than a decade.

Hajj costs at least $5,000 per person, and Halima said she shared her story with friends to raise money for both her and her father’s visit.

“Yesterday was the first time I saw the Kaaba,” he said, referring to the large black cube structure in the center of the Grand Mosque.

‘He is the prime minister of the people!’ From India to Pakistan, Wrestler Pooja Gehlot’s consolation won heartsSEXI News