Passengers reached for Amarnath Yatra till August 5, in view of bad weather, the administration appeals

Talking to reporters on Tuesday, Jammu and Kashmir Lieutenant Governor Manoj Singha said that this year more than three lakh devotees of Baba Barfani have visited Baba. At the same time, he said that he also appealed to come for the yatra before August 5. 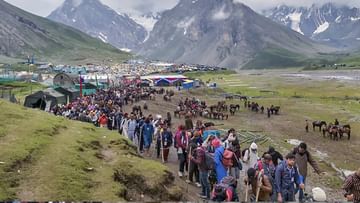 Amarnath has been temporarily stopped several times due to bad weather.

Amarnath Yatra continues. This year after two years because of Corona Pilgrimage to Amarnaath A visit to the holy cave has been organized. However, many times during the travel period, passengers have to face bad weather. Meanwhile, in view of the forecast of bad weather, the Jammu and Kashmir administration has issued an appeal to the travelers planning to visit the holy cave of Amarnath. The administration has requested such travelers to reach for Amarnath Yatra from 5th August.

Appeal in view of forecast of more rain

The Jammu and Kashmir government has issued an appeal in the past for the pilgrims planning to visit the holy cave of Amarnath. The administration has asked all such passengers to come for the journey before August 5. The administration said that the Meteorological Department has issued a forecast that there is a possibility of heavy rains in Jammu and Kashmir in the days after August 5.

So far more than 3 lakh people have visited

Talking to reporters on Tuesday, Jammu and Kashmir Lieutenant Governor Manoj Singha said that this year more than three lakh devotees of Baba Barfani have visited Baba. At the same time, he said that due to the heat this year, Baba’s form is not there and nature is also not supporting him. Because of this, there has been a lot of rain in many areas. The Lieutenant Governor said that he urges the passengers that those who are yet to have darshan reach before August 5. Because after that the weather is not looking favorable.

In fact, Lieutenant Governor Manoj Singha performed the last worship of the stick of Amarnath Yatra at Dashanami Akhara located in Srinagar here. Which takes place on the occasion of Nag Panchami. During this, he said that it has been a tradition that the stick which is happy on the day of Nag Panchami is worshipped. And then on the occasion of the conclusion of Amarnath Yatra, Maharaj ji goes with a stick. That worship was completed here. He said that it is a happy coincidence that more than three lakh devotees from across the country have so far visited Baba.


15 passengers died due to cloudburst

In fact, this year’s Amarnath Yatra remains a challenge for the Jammu and Kashmir administration due to bad weather. Earlier on July 8, the incident of cloudburst near the cave was reported. Due to this flood, 15 pilgrims who came for darshan had died. While the help of the Air Force was also taken to search for more than 35 missing passengers and to carry out relief work.

Ravana ‘Islamic’? Why Adipurush is getting hated for ‘wrong’ depiction of RamayanaSEXI News

Ravana ‘Islamic’? Why Adipurush is getting hated for ‘wrong’ depiction of RamayanaSEXI News